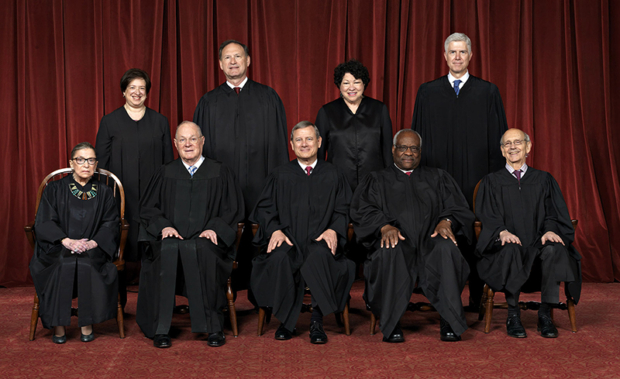 The Supreme Court of the United States met behind closed doors today, to begin business as a fully staffed court once again. Since the retirement of Justice Anthony Kennedy, the Court has been in recess, awaiting the swearing in ceremony of Justice Kennedy’s replacement. Justice Brett Kavanaugh was sworn in on Saturday, after a smooth confirmation process supported by an enthusiastic and even-minded bi-partisan Senate. Americans from coast to coast were very impressed with the entire process.

According to unnamed sources, the first order of business was a brief orientation for the newly appointed Justice. Chief Justice Roberts appointed Justice Kavanaugh to the “Keep Ginsburg Awake Committee”, recently vacated by Justice Kennedy. Justice Kennedy had left some notes, but everyone agreed that he was about as good at that as he was writing opinions on things such as same-sex marriage, so everyone encouraged Justice Kavanaugh to come up with his own plan.

Justice Kennedy had also left extensive notes on a number of matters from the constitution to Roe v. Wade, but then someone noticed that they were all  private memos from Barack Obama. After a pause, parishioners from Chicago’s Resurrection parish were consulted and the Justices voted 5-4 to burn the notes. Justice Thomas advised Justice Breyer to “get used to it, it’s only going to get worse from here on”.

The Justices returned to discussing rules such as the liquid refreshments they could take to the bench. In the past, there were no rules with regard to the drinks the Justices brought to the bench, even though people suspected Harry Blackmun had more than just water in his glass. While everyone agreed that Justice Ginsburg should always have as much caffeine as possible, it was decided that no Justice appointed after October 1, 2018, should have ice in their drink. Justice Kavanaugh was assured that this had nothing to do with him, though Justice Sotomayor was heard saying, “I’m okay being stuck here with him, but I’m not going to lose an eye out of this deal. If he can have ice, I want Kareem Abdul-Jabbar goggles”. After a tense debate, it was settled that no ice was allowed, but after the first hearing, Justices under the age of 80 will be allowed to drink beer.

After the meeting, the Justices were fitted for 24-7 body cams. The devices are developed from cutting-edge military technology. Each Justice has a chip implanted in their scalp. Wherever they go, they are followed by a drone which records every move they make, including their vital statistics, such as heart rate, body temperature, and any use of their reproductive organs. Justice Ginsburg’s drone was thought to have been malfunctioning, since her drone could not detect any vital statistics. At last report, the drone checked out, but Justice Ginsburg hasn’t.

Next on the court’s calendar is Beach Week, though not on the Jersey Shore. Instead, the Justices will be flown to Russia on a private jet, where they will be treated to a week at the site of President Trump’s future Presidential Library on the shore of Lake Baikal. If all nine Justices survive the trip, they will have their group photo taken upon their return to U.S. soil. Beach Week will include further orientation for Justice Kavanaugh, as well as instruction on Devil’s Triangle and standard quarters, led by Justice Kavanaugh.

They opted not to take their group photo during their first meeting because a majority thought they will likely be taking a new group photo with President Trump’s 3rdnominee soon anyway. Justice Gorsuch was overheard saying, “why waste the time?”. Justices Breyer and Ginsburg joined in a dissenting opinion, but even Justices Kagan and Sotomayor could not take it seriously.