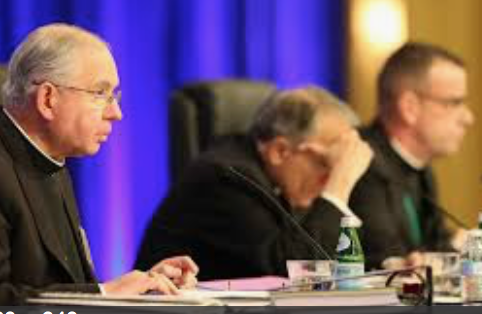 The United States Conference of Catholic Bishops gathered for their annual meeting last week in Baltimore, Maryland. Over 200 bishops, archbishops, and cardinals tackled the toughest issues facing the Church, including racism, immigration, and clericalism. Some bishops wanted to talk about the fact that Cardinal Theodore McCarrick had been promoted over and over again, in spite of the fact that he was having lots of sex with young seminarians, simultaneously destroying the priesthood while he ran young men off from the Catholic faith, but other bishops thought that was boring. Archbishop Tom Wetski of Florida said: “The Church is moving on. People don’t seem to really care if a few cardinals, bishops, and priests are having sex with each other. As long as we avoid reading all the articles and blogs about how immoral and corrupt we are, we will be fine because people don’t like confrontation and hardly any of us will have someone come up to us and call us out for being an active homosexual or for supporting active homosexuality within the Church. The whole McCarrick thing is blowing over. We need to get back to the mission of the Church which is to open the country’s borders and reassure everyone that we’re all going to end up in Heaven anyway.”

Another Bishop then took the podium and questioned whether it was a good idea to sit quietly while a well-known priest travels around, basically saying that he doesn’t believe the doctrine of the Church on homosexuality and basic morality. After he said this there was light applause, but it was from the hotel’s waiters and kitchen staff. Most of the bishops were on their smart phones and were not listening. Security ushered him back to his seat and scratched his name off of the list of bishops who were invited to the cocktail hour that evening.

After the first day was concluded, I spoke to several bishops as they left the meeting. I asked them if they were surprised that Pope Francis had directed them not to take formal action on addressing the sex scandal. One bishop said he was a little surprised, “But you never know what is going to come out of the Vatican these days. I suppose it is better to be warned then to go ahead and do something and find that you have been appointed to a new diocese in Syria.”

Another member of the hierarchy commented, off the record, that he was not surprised at all. I’ll simply identify him as Cardinal Rabbithole. He said he had been working on a “much better plan” behind the scenes with several high-ranking Church officials because he did not want the bishops to end up going down a rabbit hole on this. He said that the pope has “got to get on with other things, of talking about the environment and protecting migrants and carrying on the work of the Church.” He added, “People really don’t realize how much plastic is in the oceans these days and how much that hinders the work of the Church.”

When I asked him to explain how plastic in the oceans hindered the Church’s mission he called me a racist and stared at me with a strange, vacant look in his eyes.

I then changed the subject and asked him how his plan was better than a lay led commission which would investigate allegations against bishops. He explained that the only way to properly address allegations against bishops is to have other bishops investigate those claims. “Otherwise, we could have a lot of problems. It’s like this: Say a bishop is abusing minors or he is not protecting youth from predators. Now that is a big deal. It could cost the Church a lot of money if we get caught doing that. We have to put a stop to that right away because it looks bad and it really cuts into the finances the Church has for my retirement. But say a bishop is sleeping around with adult men, such as seminarians and priests. Now that is a totally different story. We hardly ever get sued for that and when we do, we pay a couple hundred thousand dollars and everybody’s happy. A lay led commission may get mixed up and decide that these two scenarios are much the same. This would be terrible. It could mean that a bishop might be sanctioned or asked to retire simply because he’s sleeping around with adult men. What kind of God would want that? God forgives us, he will never punish us unless we ask him to punish us. I’m certainly not asking for any punishment. Not that I’ve done anything wrong mind you. But with an investigation led by a metropolitan, we’ll be much more able to take care of each other and make sure no bishop gets into trouble for things he has done.” He then stared at me with a weird half-smile on his face.

I wasn’t sure what to say at that point, so I pointed out that 99% of Cardinal McCarrick’s victims were adult men. To that, Cardinal Rabbithole said, “You are a backward, alt-right, troll of a homophobe. Clearly you are not adequately ashamed of being a white, Christian, male.” Then he strolled off, wishing me a Merry Christmas. I pointed out that it wasn’t even Thanksgiving yet. To which he replied, “When you are a prince of the Church, everyday is Christmas”.