Posted 3 months ago by Bob Sullivan 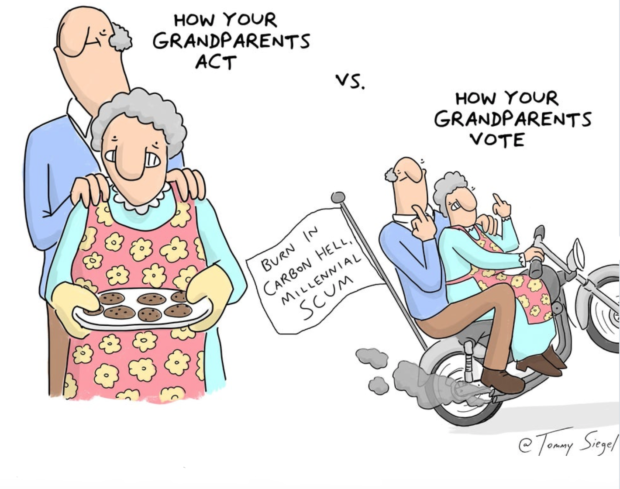 If you are a grandparent, or aspire to be a grandparent someday, you should think through your beliefs, and the logical extension of your choices, before you vote on November 3rd. This is also excellent advice for great grandparents.

Look your beautiful grandchild in the eye, and consider what you would do to erase them from your family.

By voting for the radically pro-abortion Biden/Harris ticket, which is simply the Democratic Party’s flavor of the day, you are intentionally or unintentionally voting to expand and increase abortion in the U.S. and internationally. There is simply no way around this fact.

You might be inclined to vote for Biden because you think he will be more helpful toward immigrants, the poor, women, and other groups you support. If you are more motivated by challenges to these groups than you are regarding the challenge that abortion poses for the unborn, a little perspective might help you order your priorities a lot better.

Some might think I’m being too radical or two philosophical in asking questions like this, but in reality, this is a very personal question few pro-choice advocates are willing to consider.

Grandparents love their grandchildren. It is also very natural for people to desire to have generations of their family follow them. It is very interesting to research your own genealogy, so you can learn about family members from generations past.

Lyon Gardiner Tyler Jr., of Franklin, Tennessee, died Sept. 26, 2020. Lyon was the grandson of John Tyler, who happened to be the 10th president of the United States from 1841-1845. President Tyler was. born in 1790! The passing of Lyon Gardiner Tyler Jr., was newsworthy because it is interesting to see how we are connected to those who have gone before us. If you do the math, you will see that three generations of this family spanned 230 years and touched three centuries.

In another social media post, we see a photo of Ralph Lincoln, a 3rd cousin of Abraham Lincoln, next to a photo of our 16th President. Their facial features are remarkably similar.

Then we have one of millions of social media posts by proud grandparents. One recent post struck me as troubling because of what I know about this particular grandparent. Randall Moody volunteers as an escort at the Planned Parenthood abortion clinic in Lincoln, Nebraska. He occasionally posts pictures of himself after working at the clinic, commenting about how proud he is to perform this dark work for the evil abortion giant. He doesn’t use those words though. He describes his work as “important” and his friends call him a hero. When I pressed him on his decision to escort women into the clinic for their abortions, he tried to avoid a public discussion with me. He offered to educate me privately through email or private message, but I suggested it was a great way to educate people if we had the discussion publicly. He declined further discussion at that point.

So my question remains: Which grandchild should not exist?

For Randall Moody and for everyone else on earth, including you and me, there will come a day when we will be required to account for our actions. Will your witnesses be the thankful who will testify about the effort you expended to protect them, protect their lives, and possibly even save their soul? Or will your witnesses be the victims of abortion and those who worked in the abortion industry who can merely testify that you facilitated death? Will any of those witnesses be from your very own family?

Since you have no rights if you are deprived of the right to live, it is obvious that a vote for Biden/Harris is totally unacceptable to anyone who truly cares about their family and friends, but also for anyone who cares about their neighbor. You simply have to start with life. From there, you can build on the first right and make the other rights more accessible to everyone. For without life, you cannot have food, shelter, protection, an education, love, liberty, happiness, or anything else. By voting for abortion (a.k.a. Biden/Harris), you are voting to take the chance of all these things away from family, friends, and strangers.

Oh, and by the way, Biden/Harris is also a vote for Socialism, so even for those who will not be aborted, the ideals of liberty and happiness are just an empty promise. Under Biden/Harris and the socialist government that will become entrenched, there will only be rules, regulations, and regret.

3 months ago No Comments