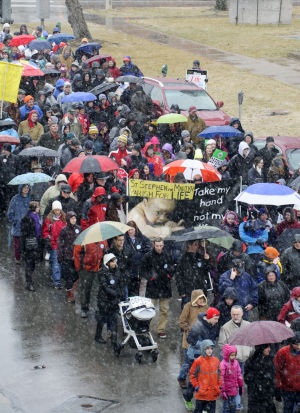 Our culture is recovering from some of the madness of the sexual revolution. I can say this because I have seen it firsthand. Since January 1st, I’ve been on two pilgrimages that would have been considered countercultural until about 10 years ago. But now, being Pro-Life is actually, the “in thing”. At least it is “in” with Americans under the age of 30.

The first of these pilgrimages was the January 22nd, National Life March in Washington, D.C. I went as a one of the chaperones for about 250 high school students, including my 15 year old daughter. The second was January 31st, Nebraska Walk for Life with all 5 of my daughters. Some of the abortion activists at the March for Life

Don’t get me wrong, there are a large number of parents and grandparents in the Pro-Life movement. And it is these more experienced Pro-Lifers who built the movement through the years when the abortion advocates appeared to have the momentum, the youth and the consensus of the people. When events such as the Life March and Walk for Life began, over 40 years ago, most of America thought the battle and the war had been won by those who worshiped abortion and contraception. The changes to our culture had come so fast and so thoroughly that the two competing ideologies seemed like a mismatch of epic proportions. But now, 42 years after Roe v. Wade, it looks more like the tale of the Tortoise and the Hare. The steady and determined Pro-Life movement has pulled ahead, and it looks like we are only a few years away from the total repudiation of the lie of the culture of death.

Our youth understand that abortion is not only ugly, hateful and barbaric, they recognize the fact that contraception is a hopeless and poisonous reliance on the unnatural and unhealthy decision to cause a perfectly healthy part of the human body to malfunction. We appear to be living in a day and age when more and more Americans are recognizing that cooperating with nature is much healthier than trying to inject our food and our bodies with processed, manufactured, modified and altered substances.

Research consistently confirms the logic that living in a way that is in conflict with natural law, the normal operation of our bodies and the natural operation of our brain, creates all sort of problems. These problems span from cancer to suicide, depression, eating disorders, blood clots and many other terrible side effects. Strangely, the use of contraception can actually result in unplanned pregnancy and once a female decides she wants to start a family, it may be too late because of infertility. Whenever humans decide to tinker with nature, unexpected problems come up.

Our youth realize that the values of the sexual revolution are unhealthy because chemicals, medications, added hormones and devices, enslave people in an illogical and complicated way of life. The aging culture of death is dominated by an ideology that requires an unnatural way of life and results in sickness and sadness. The activists scream, “my body, my choice”, but their true message is, “my selfishness, my child’s consequence”. Truths such as Theology of the Body, chastity, purity and abstinence are the paths to freedom. Freedom offers a happiness that is grounded in cooperation with nature.

Americans are beginning to accept the fact that a culture which uses artificial contraception as a regular course, does not liberate women. Instead, it provides men the opportunity to use women without the inconvenient side-effect of impregnating them. Some studies suggest that around 80% of women use artificial birth control at some point in their life. Since the primary purpose for contraception is to avoid pregnancy, one can reasonably suspect that many of the women who are using contraception are engaging in the behavior that would otherwise result in pregnancy. But men who are not “all in” on a relationship place a high value on sex with a reduced likelihood of pregnancy. But men who are not “all in” on a relationship typically make poor friends, boyfriends, significant others, partners, husbands and fathers. The challenges facing children of single-parent homes is well known. Approximately 40% of American children are currently living in single-parent homes. This is an increase, not a decrease, since 1973. But the culture of death relishes promiscuity, single-parent homes and casual relationships.

Seeing that teens and college aged Americans were starting to question the wisdom of removing natural inhibitions for promiscuous sex, Planned Parenthood began telling people that promiscuity wasn’t the regrettable behavior that the majority of people thought it was. Planned Parenthood tried to rebrand promiscuity as normal (even admirable) experimentation as long as it was voluntary and “protected”. I am surprised Planned Parenthood has left this little bit of advice (propaganda) up on their website after all these months. But the truth is, we all have news for Planned Parenthood: The number of sexual partners you have had actually does say volumes about your character, your morals and your personality. Actions still speak louder than words. But promiscuity is good for business when you are in the business of contraception and abortion. If you peddle contraception and abortion and can encourage your patients to have a lot of sex with a lot of people, the money just keeps pouring in.

Thankfully, most of our youth are not buying this line of bull droppings anymore.

The common theme with each of the events in which we have recently participated, is that the overwhelming majority of the pilgrims are under the age of 30 and maybe even under the age of 25. They appreciate the truth of authentic love and reject the culture of death. The madness of the sexual revolution is dying an ugly, painful and embarassing death in America.

This is also evident in the fact that people like Abby Johnson, Dr. Bernard Nathanson, Norma McCorvey (a.k.a. Jane Roe of Roe v. Wade), Carol Everett and many others who were in the business of abortion have left the industry to become Pro-Life. Those who remain in the culture of death are paragons of self-deception, fanaticism in spite of reason and seething hatred for everyone, including themselves.

The myth of the self-indulgent pleasure of the culture of death is bondage. It is good to see that our culture is back on the right track.