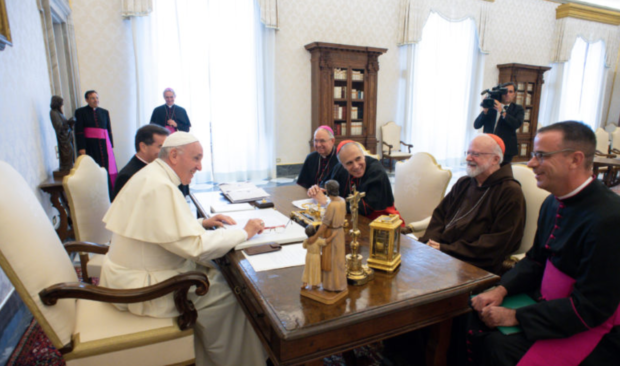 So, let me get this right. The cardinals elected a “reform pope” who would flush the debris out of the curia, clean up the money laundering and scheming in the Vatican bank, and renew the Church’s commitment to the poor and the outcast. To do this, the “reform pope” appointed Libero Milone, the first ever independent auditor of the Vatican bank, to audit the financial affairs of the Vatican, but then cut ties with him when he started to hit his stride in uncovering embarrassing corruption. The “reform pope”, Pope Francis, also shrugged off the gay lobby when asked about it, which along with the financial corruption represents the majority of the debris in the curia. Finally, when various countries have discovered that there is significant sexual corruption in the Church, such as the United States and Chile – as if all the other countries are free from such problems – the “reform pope” has either done nothing (U.S.), or he has defended the perpetrators (Chile).

In the case of Chile, not only did he first appoint Bishop Juan Barros in spite of rumors that Barros had handled sexual abuse violations quite poorly, he then defended him in the face of accusers which were later proven credible.

He seems to have followed a similar pattern of poor judgment with regard to Archbishop Theodore McCarrick in the United States. It appears that Pope Francis knew of McCarrick’s sordid past, yet he revived the churchman’s career anyway, only accepting McCarrick’s resignation from the college of cardinals after McCarrick made the first move in offering to resign due to compelling evidence of his lifetime of homosexual manipulation and abuse.

In light of this, a contingent of U.S. bishops traveled to Rome to specifically plead for an official investigation – an apostolic visitation – into the United States Church, to be led by the Vatican. After a nice laugh together – as shown in the official picture released by the Vatican to mark the visit – the “reform pope” saw no real reason for such drastic measures. Instead, he told the bishops to have a nice retreat and pray about it. The U.S. bishops complied and set up a retreat, but at the same time, they decided to take matters into their own hands. They came up with an accountability plan which would help hold bishops more accountable for abuses within their own dioceses, and they scheduled to meet as a body and ratify that plan this week.

If recent history is any indication as to whether this unprecedented move was consistent with the pontificate of the “reform pope”, the meeting would have gone off without a hitch. Sure, a few of the bishops would have bristled at the plan, but an overwhelming majority would have approved the plan. This kind of subsidiarity has been all the rage in the Church over the past few years. The Argentinian bishops decided that they should approve distribution of the Eucharist to Catholics who have been divorced and remarried without annulments (meaning that in the eyes of the Church, they are living in adulterous relationships). The “reform pope” congratulated them on their decision. The Maltese bishops decided to do the same things in their dioceses and the “reform pope” was pleased. The German bishops wish to allow non-Catholic spouses of Catholics to receive the Eucharist and the “reform pope” praises the “Christian spirit” of the bishops instead of telling them they are insane. In each case, the Pope never corrected these horrid errors. Not a peep of correction was heard.

So when the U.S. bishops were planning to take action on a matter which has caused immense harm to the body of Christ, not only preying on many on the peripheries of the Church, but actually destroying the faith of many people, thereby casting them to the peripheries of the Church, you would be wise to expect that the “reform pope” would be supportive, if not emphatic. Unfortunately, you would be wrong.

Possibly it is because the “reform pope” is also a Jesuit. For the past five decades or more (hopefully things have changed in the past decade or so), Jesuits are trained to approach reality a little differently than most of us. And somewhere in this education, they are apparently trained to observe a very thin line between clarity and vagueness, staying well on the side of vagueness. Therefore, the night before the U.S. bishops meeting, the Congregation of Bishops, led by Cardinal Ouellet, who is still a fan of the “reform pope”, informed the U.S. bishops that they were to take no action on the sexual abuse crisis at their meeting. Instead, they were told to wait several months until the Vatican could address the issue. Pardon me?

This is the Vatican who declined to act several months ago and recommended a prayerful retreat instead of an investigation. This is the same Vatican which has taken little or no action on any reform in the curia, in the Vatican bank, and which has acknowledged the existence of a gay mafia in the Vatican but has decided that it cannot do anything about it because the “reform pope” is not one to judge such matters.

This does not bode well for the Church. Something is obscuring the eyes of the Pope. Something is clouding his thoughts. Is it the influence of Cardinals who are so entrenched in corruption that they have the Pope spinning in circles? Is it Satan? I think it both are significant factors.

Maybe I’m wrong. Maybe the Vatican will take the sex abuse matter head on in February. Maybe Theodore McCarrick will be tried and laicized. Maybe the curia will be restructured and reformed, and maybe the Church and the priesthood will be purified. Time will tell. Until then, we must pray, write letters to the the members of the hierarchy who are clearly either corrupt or inept, such as Cardinal Blaise Cupich, Cardinal Armand Ouellet, Bishop McElroy and others, and write letters of support to members of the hierarchy who are courageously calling for reform, such as Archbishop Chaput and Cardinal Burke.