Why No Separation of Mosque and State? 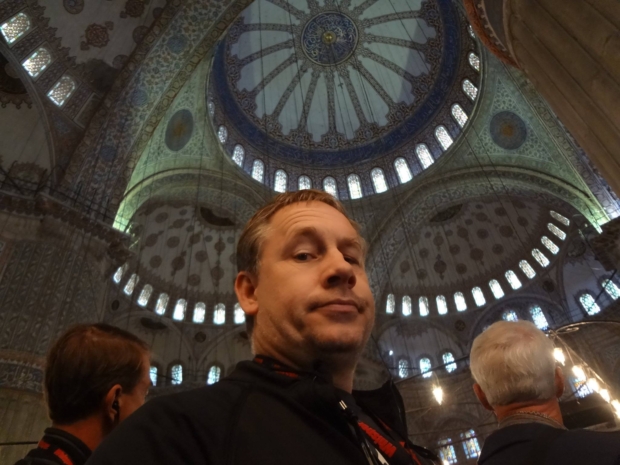 I was interviewed by a secular humanist the other day. He just walked up to me on the corner and asked if I would answer some questions on camera. I said “sure”. He clarified that he was an atheist and a Democrat. I appreciated his desire to state the obvious. His need to clarify that he was not just a secular humanist, but also an atheist and a Democrat caused me to wonder if everyone on the left side of the socio-political side of our society has to go around declaring exactly where they fit in on that side. If so, I hope they are much more accurate than the way they classify everyone on the right side of the socio-political spectrum. I say this because it seems like they believe that everyone who is not on the left, is a mixture of Adolf Hitler, well… actually just Adolf Hitler.

But back to the secular humanist who wanted to interview me. He wanted to know what I thought about the separation of Church and State, as well as what the Catholic Church taught about the 1st Amendment to the U.S. Constitution.

I quickly explained that the 1st Amendment was drafted to protect religions from tyrannical government interference. It was also drafted to prevent each state in the union from adopting one religion as the official state religion. Up until the 1800’s, this was a common governmental practice in Europe (you know, that place where all the founding fathers came from?). For centuries, the aristocracy of Europe would declare their faith as the official faith of the people within their jurisdiction. This did not go well and the founders of the United States recognized that. But they also recognized that government has no place in religion (the Church of England being a prime example), so they wanted to balance the two with the 1st Amendment. All religions in the U.S. have freedom to exist and practice their faith openly and without unjust interference by the government and the government will not pick favorites. What a wonderful way to keep obstacles out of the way of truth?

As for the Catholic Church’s teaching regarding the 1st Amendment to the U.S. Constitution? My interviewer was surprised to learn that no such teaching exists. I explained that the Vatican does not spend a lot of time analyzing civil laws in all the countries around the world, not even the “extra special” United States. I explained that the Church is concerned about faith and morals and wants all leaders to be guided by love of God, love of neighbor and truth. To the extent that the 1st Amendment does this, the Church would certainly approve, but not because of the wording of the law, because it is not inconsistent with truth, natural law or Scripture.

I don’t think he ever published the interview.

The interview got me thinking about some questions I’d love to ask secular humanists, progressives, liberals, members of Antifa, BLM and the women who governed the women’s march earlier this year. The problem is, while I’m happy to discuss these things with them and I’m confident in sitting for an interview without any prior preparation (he just walked up to me on the street), they aren’t. There is a reason for this: My beliefs are consistent with reality and do not contradict (at least not consistently and thoroughly). Progressives, many Democrats, almost all liberals and dare I say every single member of Antifa, BLM and radical feminism contradict themselves on nearly every issue. I would have a blast interviewing each of them, but they would find the experience very unsettling.

One of many questions I’d have is why they believe that the separation of Church and State actually means the removal of all Christian influence from government, the workplace and the public square. Once they answered, I would ask them if they believe in the separation of Mosque and State. Most would say they do believe in a separation of Mosque and State, which would enable me to engage in a long list of questions that would be so much fun to ask that it would be almost impossible to ask them without laughing and dancing the entire time.