Posted 8 months ago by Bob Sullivan 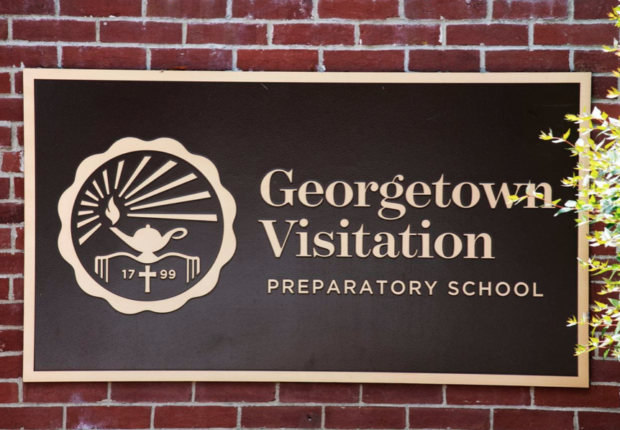 Earlier this month, Georgetown Visitation Prep, an all-girls preparatory school in Washington D.C., announced that it would begin publishing same-sex union news in its alumnae magazine. That’s not the only change taking place though.

“The Church is a garden patterned with unlimited flowers; it is necessary that they should be of various sizes, various colors, various odors, and, to sum it up, different perfections … all of them provide a beauty most pleasing and perfect.”

Apparently Sister isn’t a gardener, otherwise she would know that a garden can have some weeds as well, and unless you tend to the garden by dealing with the weeds, the weeds will overtake it. Mind you, this does not always entail pulling up the weeds.

Additionally, if you read this quote in context, St. Francis de Sales was talking about God’s creation, not the distortions of God’s creation caused by sin. He writes, “If someone should ask why God made melons bigger than strawberries or lilies larger than violets… ‘each one has his own gift, one in this way and another in that’, says the Holy Ghost“. One has to wonder if Sister is saying that fornication and homosexual sex are gifts. Is that what you are saying Sister?

Interestingly, when read in context, this quote references St. Paul’s first letter to the Corinthians (1 Cor 7) in which St. Paul explains chastity and references his own celibacy. Fascinating how Sister overlooked that.

Sister’s first paragraph after her terrible misuse of the above quote states:

“For many of us, Visitation is so much more than a school. It is our spiritual home. It is where we mature as women of faith, vision, and purpose; where we meet the friends who will shape our lives, support us along our journeys, challenge us, and lift us up; and where we learn to Live Jesus.”

“Recently, a Visitation friend invited me to reflect upon what it means to Live Jesus in relationship with our LGBTQ alumnae.”

It appears that Sister’s reflection was like the reflection off of the surface of a still body of water. In other words, it did not go very deep. But I’ll defer to Sister to tell you how her “reflection” went.

“As a professed Sister of the Visitation for 67 years, I have devoted my life in service to the Catholic Church. The Church is clear in its teaching on same-sex marriages. But, it is equally clear in its teaching that we are all children of God, that we each have dignity and are worthy of respect and love. I have been blessed to live my vocation here at Visitation, where I have welcomed and come to know, respect, and love thousands of unique, intelligent, passionate, and faithful women, each made in the image and likeness of God.”

Thanks for your vocation Sister, but it seems you may have tried to stay in the game a little too long. Your type of service is not needed by the Church. Maybe you were a faithful servant at one time and possibly you still serve well in some ways, but leading others to accept immoral choices and behaviors is not service to the Church, it is service to Satan. More on this later. Sister continues…

Contradiction? If Sister is saying that the Church’s teaching on sexuality contradicts its teaching on love, then she’s simply highlighting her absolute ignorance of both teachings. Authentic love, and authentic respect for the dignity of the person, is only achieved through truth. There is no way to authentically love someone by lying to them. One can honestly say, and one should say, “even though you experience same-sex attraction, you are made in the image and likeness of God and you are loved by God”. But we cannot then pat them on the back and tell them that sex outside of marriage is okay, or that sex outside of God’s design for man and woman is okay. God, the supreme biologist, made men and women in a very specific way, both very different and at the same time very complimentary. God teaches us that science and biology matter. When we cooperate with this, good things happen. When we reject the way we were made, we reject God.

Of course, I’m talking about a homosexual relationship which is not chaste. Not every same-sex attracted person engages in sex with the person to whom he or she is attracted. Daniel Mattson and Paul Darrow write and speak about this quite eloquently.

However, Sister seems to be talking about two people who do engage in homosexual sex. To blur the Christian teaching on this is to teach error.

So here is Sister’s grand announcement:

“Beginning with the fall issue of our alumnae magazine, we will publish news of our alumnae’s same-sex unions, along with all updates our alums choose to share with their classmates.”

You can almost feel her exhilaration. She can almost see her popularity soar. I had been told that the Catholic enrollment at Visitation Prep is over 90% of the student body but when I spoke with the communications director at Visitation she said she wasn’t sure if they shared that number publicly. I wondered how many of Visitation Prep’s instructors and coaches are Catholic but the communications director said she did not know if they tracked that number.

If the student body is over 90% Catholic, why would the school publicize same-sex unions?

The Church does not recognize same-sex “marriage”. Therefore, same-sex unions are nothing more than two people “shacking up”. Is the school magazine going to publish those announcements too? Not that anyone would want to publicize that, but the logical conclusion of Sister’s grand announcement would require the school to do so. Nice work Sister. Maybe they can start a new category: “Fornication Announcements!”

Continuing in this line of thought, I wonder how many families and staff members of Visitation Prep actually practice the Catholic faith. In “practice” I mean: Do they fulfill the five precepts of the Church (the absolute bare minimum to consider yourself a “practicing Catholic”. Do they attend Mass each holy day of obligation; do they receive the Eucharist at least once during the Easter season; do they receive the sacrament of reconciliation at least once per year; do they fast and abstain according to the requirements of the Church; and do they support the Church?

Sister then explains more on her discernment process:

“We reached this decision as a school and Monastery leadership after much prayerful consideration and thoughtful dialogue. We welcomed – as we always do – the respectful, earnest, faith-filled comments of several community members who contacted us directly. We encourage each of you to reach out to us when you have a question or concern. We all can grow through these courageous conversations.”

Apparently, they did not consult the Holy Spirit, any faithful Catholics, the Bible, or the Catechism of the Catholic Church. However, I do have some questions in addition to the questions I asked above:

I suppose those are enough questions for now. Sister begins the wrap on her grand announcement:

“As a Salesian school, it is our mission and ministry to understand the value of diversity and respect the dignity of each person. Our faculty and staff, along with the Board, Parents Association, and newly formed Alumnae Diversity & Inclusion Committees strive daily to ensure that Visitation is welcoming to all members of our community, including LGBTQ students, alumnae, and families. This change is an important part of ensuring that every individual is respected.”

Sister, you are failing in this effort to understand. A garden of flowers does not value the diversity of weeds, nor does it respect the dignity of the weeds by letting them overrun the garden. Over the centuries, skilled gardeners  (horticulturists) have taken weeds and through very hard work, have turned some of them into beautiful plants and flavorful foods. Lazy gardeners simply let the weeds choke out the garden, and eventually, they stop gardening. It appears Visitation Prep is in the process of abandoning the garden.

Is it any surprise that Visitation Prep has a newly formed Alumnae Diversity & Inclusion Committee? I suspect we now know who advised Sister on the proper way to “Live Jesus”.

There is an enormous difference between condemning a person and encouraging them to amend their behaviors and choices. Jesus teaches us this in John 5 and John 8, as well as many other places in Scripture. There is also an enormous difference between authentic love and inclusion. Authentic love requires truth, whereas inclusion is heavily based in feelings regardless of truth.