Posted 12 months ago by Bob Sullivan 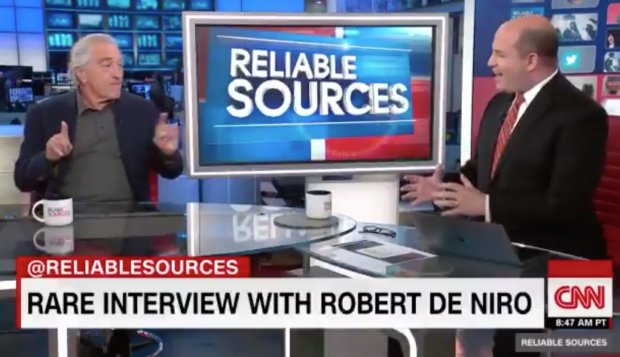 Robert De Niro recently appeared with CNN host Brian Stetzer on Stelter’s show “Reliable Sources”. Wake up people, there is an election coming. And a movie!

De Niro is becoming known for his use of the F bomb in his effort to denounce Donald Trump, but it only ends up saying more about De Niro than it does about the object of his disdain. It also says a lot about those who give De Niro a microphone or a soap box.

Mr. De Niro has a great gift of the English language, so he could easily decry Trump – persuasively – with a much more dignified, compelling, and fact laden message, couldn’t he?

As a man of fame, who has spent his life as nothing more than an entertainer who utilizes words written by others (and while being directed by a cadre of experts and marketed by the best in the business), maybe he is not as intellectually gifted as his agents and marketing professionals would have you believe. Maybe he isn’t as morally pure as he would like you to believe either. After all, he has been married twice and has sired children from at least three different women, which is a common criticism of Trump.

De Niro actually lobbied members of Congress in 1988, to dissuade them from impeaching Bill Clinton after Clinton molested Monica Lewinsky. That is a violation of the #MeToo laws, isn’t it?

Is this the past of a reliable source who now wishes to pass moral judgment on someone else? No. Unless his message is compelling.

Please avoid the urge to accuse me of whataboutery. This is an effort to remind us all that we need to consider the source instead of simply considering the enjoyment we experienced when the source played Mr. Focker (ironically). The source is De Niro himself (in a sense), but it is also the facts cited by De Niro. What does he use as the basis for his hatred of Trump? Certainly he can explain that beyond dropping the F bomb.

To a guy like De Niro, the use of vulgar language would not seem out of the ordinary. In fact, it is probably pretty mild for him. He lives in the strange alternative reality known as Hollywood (not physically, but socially and mentally – he actually lives in New York and various other locations around the world). In Hollywood, as well as in the world of fame and fortune, pornography, drug use, abortion, serial divorce, pedophilia, atheism (and Scientology) coerced rape and other sexual exploitation, open marriages, bias toward homosexual sex, consumer excess, and many other immoral practices are not only accepted, they are often expected and sometimes glorified. In that type of an environment, anything goes. Well, nearly anything. Certain conservatives are finding that their voice is not welcome.

In the world of entertainment, reasoned, appropriate, courteous, and fair words and behaviors, fail to receive attention. De Niro knows how to get attention, right?

Possibly, to make up for his own intellectual and moral limitations, De Niro resorts to dropping the F bomb in front of his fans (the other Hollywood elite and wanabees at the Golden Globes in 2018), and now on CNN, much in the same way he would do it at a cocktail party or in a private conversation with close friends. Most normal people realize that vulgar language is a filler for moments of mental lockdown. When people are confused, frustrated, enraged, and cannot think clearly, they resort to vulgar words to allow their brain to catch up to more reasoned thoughts. The more you use vulgar words, the more you are apparently not thinking clearly. However, for someone from the strange world of fame and fortune, their clearest thoughts are often childish, selfish, and based in fantasy. This is not evidence of reliability.

I’m actually surprised De Niro uses the F bomb as infrequently as he has in public venues. However, this probably tells us how often he uses vulgar language when he is in private conversation. This means he is likely spending a lot of time without clear thought.

I suppose that I’d be okay with his frequent use of the F bomb to assail people from the other side of the political and ideological spectrum though. If he would have said these things about Mr. Obama and Hillary Clinton, I would be cheering.

Actually, I wouldn’t. At least I wouldn’t if I held the same ideology, political views, or worldview as he does. If De Niro were a conservative and used this type of language publicly or privately, I’d be embarrassed and I’d distance myself from him. And if I were in a position to give him a platform from which to use this language, I wouldn’t do it. In fact, I would make it clear to him that he can deliver his message, but he cannot deliver it with vulgar and offensive language. I’d do this not because I am concerned about anyone’s ears or sensibilities. I’d do it because these discussions need to be conducted in a respectable and dignified way in order to be truly persuasive. To use the F bomb so carelessly actually diminishes the value (if any) in the message.

Without looking back or listening back to De Niro’s comments and interviews on Trump, can you identify one fact or argument he has used to discredit Trump? I didn’t think you could. But you know that he keeps saying “F Trump”, right? If that is a reliable source to you, I question your ability to reason.

In the end, De Niro has played a lot of really funny roles, but something tells me that he’s not himself in those roles any more than he is a wise, moral, or heroic figure in any other role he’s played. The funny thing about all of this is that De Niro is not uniquely intelligent, funny, compelling, or virtuous. Nor is he a reliable source by any stretch of the propaganda.

That isn’t funny, it is sad, but if you are persuaded by De Niro or any other celebrity, the joke is on you. The moral of the story is this: Don’t allow famous people to act as your moral compass, and that includes Donald Trump as much as it includes Robert De Niro.

In this case, De Niro, who is clearly an aggressive liberal progressive, has no interest in the good things Trump has done in his first term. Instead, when asked what is at the heart of his disdain for Donald Trump, De Niro simply says that he thinks Trump is crazy. That is the sum and substance of everything De Niro had to say. “He’s crazy”.

Honestly, I don’t disagree. Trump does appear to have some psychological issues. However, he has shown to deal with those issues well while performing his official duties as President. Most of his mental issues seem to come out over twitter and in some discussions with the press, and likely in some private dealings with his staff (as evidenced by a lot of firing and hiring – however, he did have a television show which tells us a lot about how he conducts his business).

However, when it comes to his approach to official policies and to the moral issues which are destroying our country, he has done a very good job compared to past presidents from both parties (though not perfect). His international work, his effort to deal with the broken immigration system left to him by five previous presidencies, his judicial appointments, his economic policies, and his work to repair the racial divide in our country…, all suggest that he is the man for the job right now.

I know, I know. You may vehemently disagree with one or more of the statements in that last paragraph. Well, good for you. That is one more fact than Bob De Niro has, and he’s been on CNN! However, in your disagreement, can you admit that many news outlets, including CNN are aggressively promoting resistance to everything Trump has done over the past three years? No? I can’t believe you are still reading this then. Maybe you are the crazy one. However, if you can say “yes” to that, consider the fact that Trump is still more successful at every step than Barack Obama was in 8 years of no resistance from what seemed like 80-90% of the media and other well-placed elites across the country.

Now, instead of that 80-90% simply being neutral, they have switched from being Presidential cheerleaders to Presidential resistance. That is quite a swing. So they bring an actor on, and let him allege that the President must be removed because:

Then he drops a couple of F bombs, they cut to a commercial and then spend a few more minutes promoting his upcoming movie. All in a Sunday morning’s work on CNN.

12 months ago No Comments