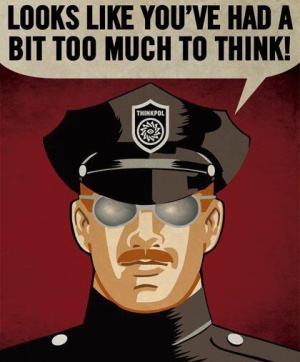 A Washington State Court Judge has ruled that Washington’s nondiscrimination law makes it illegal for an individual to think differently than the LGBT activists. I’m not criticizing the Judge, nor am I saying he Judge is wrong. He is simply interpreting the law passed by all the lawmakers in Oregon. It was the lawmakers that put the idiocy into law.  And it is because of this law and laws just like it in many other states, that living, breathing, human beings who happen to be business owners, now have to change the way they think. The Washington State lawmakers apparently didn’t see this coming.  Apparently, they thought it was just organizations, corporations or companies that would have to change the way they did business. But in Ingersoll v. Arlene’s Flowers and State of Washington v. Arlene’s Flowers, Judge Ekstrom has decided it goes beyond the business.

The small business owner who acts on his or her belief can be personally prosecuted and sued.  So its not just Arlene’s Flowers, it is also Arlene herself, or in this case, the sole proprietor of Arlene’s Flowers, Barronelle Stutzman. In the Washington case, Barronelle Stutzman declined to sell the flowers to a same-sex couple, Robert Ingersoll and Curt Freed, for their same-sex wedding ceremony.  It is important to note that she had done business with her persecutors (Ingersoll and Freed) for nine years before they approached her for work on their same-sex wedding. Therefore, she’s not “homophobic”, a hater, a bigot or anything of the sort. Her one (allegedly illegal) decision was to decline a request to provide flowers for Ingersoll and Reed’s same-sex wedding ceremony.  Nor is Arlene’s Flowers the only florist in the area.  A quick web search turns up numerous other florists in and around Richland, Washington.  In other similar cases across the country, it appears the same-sex couples have solicited various competitors who were willing to provide the goods and services sought, but decided they wanted to do business only with the business which voiced a faith-based conscientious objection. I wonder if Ingersoll and Freed did the same thing around Richland, Washington. Maybe someone in Richland can tell me.

Progressives will tell you that it is okay to think differently than the LGBT activists… as long as nobody ever finds out about it. In other words, keep your faith secret. If you run a small business and if anyone finds out that you believe marriage is reserved to relationships between one man and one woman, you may well end up kissing all of your assets and livelihood goodbye.

Before Ingersoll and Freed decided to go after Barronelle Stutzman’s personal assets (i.e. possibly everything she owns), they had a large law firm write a letter, advising her that although her decision had “hurt [Ingersoll and Freed] very deeply”, they would not sue her if she wrote a check for $5,000.00 to a local LGBT Youth Center, published a letter of apology in the local newspaper and betrayed her religious beliefs from that day forward.

It is no surprise that Barronelle declined the offer to obey the ultimatum of the thought police.  So Ingersoll and Freed filed their own private lawsuit against her to accompany the Washington Attorney General’s already filed lawsuit.  In addition to the penalties sought by the Attorney General, she may now be required to pay treble damages (that means triple damages also known as “punitive damages”) to Ingersoll and Freed as well as all of their attorney fees and costs, not to mention her own legal fees, costs and lost productivity.

This is a sad example of a law that has gotten out of control. Therefore, you need to keep this case in mind if your legislators are looking at adding things like gender, preference, identity and other LGBT buzzwords to your state’s nondiscrimination law. You will know that it is not just businesses who are at risk of being persecuted, it is individuals. When the activists are talking about fairness and happiness, you can remind them about the florist, photographer or baker who just wants to live with their conscience and make a living that supports his or her family. Also think about the other florists, photographers and bakers who have no objection and would appreciate the business. It is the LGBT activists who go on the offensive with these laws, actively seeking people of whom an example can be made.

The two U.S. coasts seem to be the hotbed for progressive thought and the Northwest may be the hottest hotbed. Washington may not even be as progressive as Oregon on this issue. Oregon is home to State Labor Commissioner, Brad Avakian, who believes traditional marriage defenders simply need rehabilitation. Avakian was talking about an Oregon baker who has a very similar story to Arlene’s Flowers.  That baker faces a fine of up to $150,000.00 and came under such local persecution that they closed their store.  They now sell what they can out of their home.

As far as I know, neither Washington nor Oregon have any Stalin-esque or Aryan Nation reeducation camps set up. Some may feel, that by mentioning progressives like Avakian in the same sense as Stalin and Joseph Goebbels, I may be engaging in a bit of hyperbole. But the ideology we face in our nation today is much more effective and much less blatant than that of the 20th century tyrants like Stalin, Lenin, Hitler and Mao.

Therefore, while I do not believe we will see the construction of any Stalin-esque reeducation camps.  Only because many LGBT activists, such as the Human Rights Campaign, already see our public schools as reeducation camps. That makes our children the recipients of their reeducation. Under a huge campaign benignly named “Project One America”, they are successful in introducing LGBT friendly books and curriculum into our public schools for students as young as pre-school age. These books champion all sorts of LGBT issues, such as the benefits of having two moms, dressing in the clothes of the opposite sex and the normalcy of gender fluidity.

What can the common citizen do in the face of such propaganda?  There is a lot we need to do, but here are some very basic suggestions on how and where to start:

Fight the bad and support the good.