Exorcism Needed at Georgetown (The Shamies) 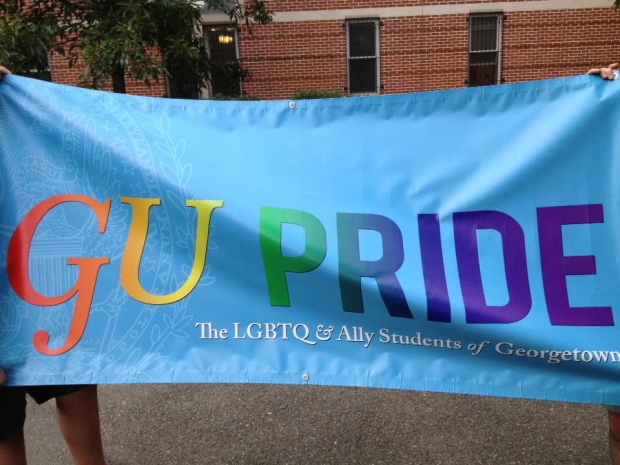 As you may have anticipated, “The Shamies” would not be complete without Georgetown. While Notre Shame and various other, once Catholic, institutions have their fair share of orthodox alumnae who are ashamed of their Alma matter’s secular trance, Georgetown happens to have William Peter Blatty. Mr. Blatty is best known for writing The Exorcist, and as it turns out, he takes his relationship with Christ, very seriously.

Mr. Blatty and 2000 other concerned G’town alumnae, have hired a legal advisor and submitted a Canonical Petition to the Holy See. This is an official complaint against Georgetown in an effort to bring their errors to the attention of the Pope and the Vatican’s oversight of Catholic colleges and universities. The Petition, signed by over 2000 alumnae, could result in the removal or suspension of Georgetown’s right to call itself Catholic and Jesuit. In other words, it would require Georgetown and its administrators and professors to be honest about their disregard of orthodox Catholicism. The Holy See is looking into things and it is possible we will eventually see some changes at Georgetown that will correct the boatload of errors Georgetown promotes.

So what has Georgetown done that gets it on this list? As with Notre Shame, it is a combination of what they have done and what they have failed to do (which is similar to a prayer these administrators and professors would recite if they actually attended Mass).

I’ll just list off a few without going through the pain of explaining the obvious anti-Catholic meaning behind each one:
• Kathleen Sebelius was a speaker at the 2012 commencement;
• In the late 90’s, the school removed all crucifixes from the school’s classrooms. After protest, they installed crosses only, and only because they could be characterized as historical symbols;
• In 1999, hard core pornographer Larry Flynt spoke at Georgetown. To my knowledge, nobody objected or did anything as bold as circulating a critical letter.
• In 2003, after Cardinal Arinze presented the commencement speech, dozens of faculty members circulated a letter protesting his pro-family and pro-life speech.
• The school holds a “lavender commencement” to congratulate those who celebrate same-sex attraction and a fluid recognition of gender identity;
• This year’s Lavender Commencement speaker was a woman currently in a same-sex relationship.
• The school had a “pro-abortion club” called GU Choice, but was forced to cease its funding and support for the group many years ago. A step the school would not take on its own initiative. Interestingly, it seems that a new abortion club has cropped up, called H*ya’s for Choice. Tricky huh? Maybe for a 7yr old.
• The school hosts a “sex positive” week which glorifies homosexual behavior.
• The school hosts The Vagina Monologues annually.
• The school has an LGBT Resource Center that serves as a pipeline of encouragement to anyone who questions their orientation.
o The Executive Director of the Campus Ministry, Rev. Kevin O’Brien, S.J., states, “The Center helps us understand the issues, struggles, concerns, and hopes of the LGBTQ community…”. The LGBT community does not hope to live a life of holiness, but maybe Father O’Brien hasn’t realized that yet. In addition to the Lavender Commencement, the LGBT Resource Center organizes activities such as Pride Month, Coming Out Month, and Gender Liberation Week just to name a few. Where do these activities fit into Catholicism?
• GU Pride (the similarity to GU Choice is noticeable) is a campus organization that promotes homosexual behavior.
• Similar to Notre Shame, any crucifixes that survived the 1990’s were covered, as was The Name of Jesus, when President Obama visited, for fear that he would be offended by them.

As with Notre Shame, I’m sure there are many additional examples of Georgetown’s lack of Catholic courage, but this gives you some examples as to how they could win a nomination as one of the nation’s least Catholic educational institutions (nevermind any priest or nuns you see walking around and teaching on campus).

How could the administrators and clergy at Georgetown have let things get this bad? If I have learned anything in the past few years it is the fact that progressives who also claim to be Catholics are as dishonest as any den of thieves in the history of treachery. In fact, they are so dishonest, they are even insincere about their dishonesty. Imagine for a minute that you walk into a room and catch your 7yr old child painting a moustache on your 2yr old. You catch your 7yr old, red-handed. You see the marker in his hand. You see him poised in front of your 2yr old like an artist at his easel. You see one half of the moustache is already finished on your 2yr old’s upper lip. What is the typical reaction of the 7yr old in this situation? It is one of innocent confusion. “I have no idea how this happened dad. I walked in and little Jimmy here was sitting there holding this big black permanent marker, so I grabbed it out of his hand just before you walked in. Honest, dad, I haven’t done anything wrong.”

Picture yourself now, talking to the highly educated professors and administrators of Georgetown as you explain that the Catholic Church teaches that abortion and homosexual behavior are inconsistent with Catholicism and that as a Catholic institution, it is wrong to promote the flawed teaching of progressives and moral relativists. The looks you will get from each of them is identical to that of your 7yr old. They will try to pawn it off on providing diverse education opportunities, “Issues need to be debated, with strong and legitimate beliefs held on all sides of challenging issues.” Well, I’ve got news for progressives like this: You cannot call yourself a Catholic institution and accept error as “legitimate”. Nor can you say you are fostering debate from all sides and omit the Catholic perspective. There is an age-old word for those who promote something false as though it is true. We call such a person a liar. Contrary to popular belief, their pants are not usually on fire, so they are a little more difficult to spot.

However, I have been able to decipher a fool-proof way of identifying liars regardless of any flaming trousers. You can be certain that someone is a liar if they work for Georgetown and behave as though everything is just fine. It is as simple as that. This same method can be used with any Catholic school. Try it with Notre Shame.

So here is my warning to graduating high school seniors, parents who are sending children to Georgetown and parents who will soon consider sending a son or daughter to Georgetown: Regardless of your faith or the faith of your child, why would you send your son or daughter to an institution who is dishonest about the very basis for its existence? If Georgetown, can’t even be honest about its disregard of Catholicism in its campus and in its classrooms, how reputable is the rest of their intellectual tradition? It seems that Georgetown has a message that it wants to deliver and that message is that Georgetown stands for going with the flow of the culture instead of standing for the fullness of truth. Such a message creates followers, not leaders. Worse yet, it creates confused and hypocritical followers.

Maybe an exorcism would help rid Georgetown of the demons of progressivism.