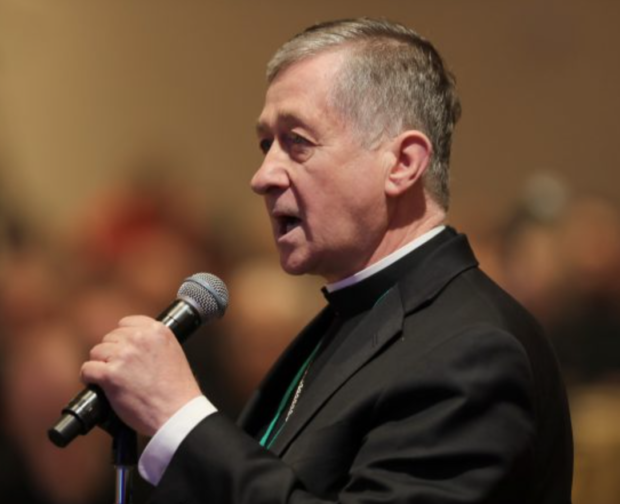 According to Washington State Statute 26.44.030, it is a crime if a public or private official fails to report child abuse to law enforcement.

Cardinal Cupich’s former diocese of Spokane Washington recently disclosed that the University of Gonzaga, a Jesuit university in the diocese, had housed a large number of predator priests over the past several decades. Although the current bishop of Spokane was unaware of this fact, Cardinal Cupich was aware of it at or near the beginning of his time as bishop of Spokane.

The Washington law, which has been in effect for decades, requires officials to contact law enforcement when they have reasonable cause to believe that, “a child has suffered abuse or neglect caused by a person over whom he or she regularly exercises supervisory authority”. In such a case, the official is to make a report to law enforcement.

According to news sources such as The Catholic News Agency, in 2011, “The Jesuit provincial, Father Patrick Lee, informed then-Bishop Blase Cupich that seven priests with safety plans in place were living at Bea House [on the Gonzaga campus]”. Cupich was the bishop of Spokane from 2010 to 2014.

One of the priests, Fr. James Poole, S.J. had sexually abused at least one young girl over the course of approximately eight years, beginning when she was only ten years old. Poole was the suspected perpetrator in cases involving approximately eighteen different child victims. Pool died in March, 2018.

Violation of the law is a gross misdemeanor carrying a possible sentence of 364 days in jail and a $5,000.00 fine.

Cardinal Cupich is expected to provide at least one of several possible explanations as to why he took no action when he learned that priests with “safety plans” were living on the Gonzaga campus. First, he will explain that he had no control over the Jesuit university. Even as the local bishop, the university did not answer to him because it was run and governed by a separate board and the Society of Jesus. Second, he will claim that he did not have adequate information  and therefore did not have “reasonable cause” to believe that any of the priests on the Gonzaga campus had abused a child. Third, he will point out that he only received the information 2ndhand, or even 3rdhand. He will explain that Fr. Patrick Lee or another Jesuit official had the obligation to make the report. Finally, he will explain that the abuse happened many years prior to 2011, when he first learned of the claims that priests who were living within his diocese had abused children in the past.

Does a Bishop have control over a Jesuit university in his diocese? While he may not have full legal authority, he does have some degree of canonical authority. In other words, while he may not be able to call the shots at the school, he can certainly have influence on school leaders if he chooses to make public statements, call for investigations, or report concerns to legal authorities. For some reason, Fr. Lee thought it necessary to inform then-Bishop Cupich about the presence of predatory priests on the campus. He certainly wasn’t making that report in hopes of a medal. Certainly the Cardinal feels he should have done more since he recently stated: “I think we have to say that people who have substantiated cases, credible accusations, should be listed publicly for victims to come forward. I’ve always done that.” Well, except in the case of the Jesuit perpetrators it appears. I wonder if this jogs his memory as to other incidents he’s failed to take action.

Did Cardinal Cupich have enough information to report something to law enforcement? Let me put it this way. If someone told you that your neighbor had molested children, would you just ignore that report or would you determine if he had ever been criminally prosecuted for it? I think we would all look into it, especially if we were in a position of authority and could probably learn a lot of information by way of a few phone calls. I think Cupich either had enough information, or with very little effort, he could have had all the information necessary.

Did Cardinal Cupich’s source relieve him of any obligation under the law? In other words, did Cardinal Cupich have to see the abuse or get an admission from the abuser before he had an obligation to act, or does getting the information through an intermediary obligate the reporting? Fr. Lee was the Jesuit provincial for the Northeastern U.S. In other words, he was the top dog of the Jesuit order in Washington. He had access to the information on the priests living on the Gonzaga campus and shared some of that information with Cardinal Cupich. If Cardinal Cupich was truly concerned for the safety of others instead of the image of the Church, he would have inquired further or he would have put law enforcement on notice. Instead, he apparently did nothing. That is an interesting reaction from a man who recently said, “We have to make sure that everybody in the church lives an authentic, chaste life. That’s without question… I think we take our eye off the ball if we don’t deal with the business of privilege, power and protection of a clerical culture.”

Was the abuse too long ago to be reported? There appears to be nothing in the law which relieves an official of the obligation to report abuse regardless of when the abuse happened. There may be a time limit after which a perpetrator can no longer be prosecuted criminally or civilly, but there appears to be no statute of limitations regarding reporting abuse. Cardinal Cupich recently commented on the Pennsylvania Grand Jury Report which dealt with abuse cases from decades ago: “Were they reported to Rome, like they should have been, even if they were older cases?” Therefore, Cardinal Cupich himself would disagree with using time as a defense, wouldn’t he?

In the meantime, there should be an investigation. Cardinal Cupich himself recently said, “I will allow myself to be investigated by an independent group if there is an accusation against me.”

So for the good of the Church, and in order to keep Cardinal Cupich’s actions consistent with his words, he must resign, cooperate with an investigation into his failure to report, and take on a lifetime of quiet penance and prayer in solitude.