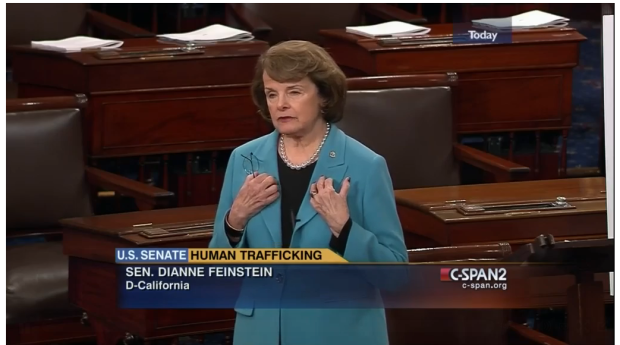 Everyone agrees that slavery is evil and nothing is more evil than forcing children to have sex with anyone, much less a large numbers of strangers. This is usually accomplished by kidnapping the child or coaxing a homeless child into a situation where they think they are going to be working in a factory or some legitimate entry level position in the workforce. But as soon as the child is out of the public eye, they are severely beaten, terrified by threats that their family members will be killed or the child is drugged beyond consciousness and quickly addicted to drugs. Then they are raped, often many, many times. And all this is before they are forced to have sex all day/night long with anonymous predators and significantly corrupt people.

This process starts most commonly in 3rd world countries, but it can start right here in America too. No matter where it starts, a very large percentage of all sex slaves end up in the U.S. at some point. They are used until they are no longer profitable for their captors. Many die of overdose, suicide or from being beaten to death or otherwise murdered. They end up with significant mental illness, untreated STD’s and a profound loss of their identity as a human. Those who don’t gradually move from being a slave of an organized ring, are thrown onto the streets, where they are further victimized by men (mostly) who crave a horribly disordered use of their fellow humans.

Events such as the Super Bowl, large corporate conventions and other events where men from all over the U.S. gather, are hot spots for those who market sex slaves to wealthier men (mostly), who see their travels as an opportunity to engage in a sick and dehumanizing abuse of minors and young adults. Most of these men (mostly), return home after the event, to resume life with their spouse, children, church members and community, as though they had not just participated in the slow and tortuous murder of a person’s mind, body and soul.

How can we let this happen in our civilized culture? Most of us can’t. That is why our federal government has taken it upon themselves to come up with a solution. A large group of senators are trying to pass a law that punishes people for engaging in Human Trafficking. I think this is a great start, and so did a large bi-partisan majority of the U.S. Senate, until abortion advocates noticed some language in the bill that they did not like.

Now, our politicians are proving once again, that the right thing is easier said than done, especially when groups like NARAL and Planned Parenthood get involved. For the abortion lobby, laws that help anyone are secondary to the right of a woman to receive an abortion at little or no cost.

You see, the proposed bill, does not automatically provide public funds for elective abortions to the victims of Human Trafficking. To NARAL and the other abortion fanatics, this is unacceptable. They wonder how our federal lawmakers could pass any law that does not include public funds for abortion on demand?

But even with this “objectionable” language in the bill, over a dozen known, abortion-loving senators, signed on as co-sponsors of the bill when it was introduced.

But now that the abortion-infatuated politicians have been told not to support the bill, the most obedient abortion-fans who sponsored the bill have removed their names as co-sponsors. When I say obedient, I mean that senators like Dick Durbin, Diane Feinstein and Barbara Boxer, are obedient to the abortion lobby. I can only imagine the tongue lashing these sheepish senators endured as NARAL, Planned Parenthood and NOW called them up to inform them what they needed to do. Some of them may have hesitated until they learned that future campaign funds and all the other little perks of their position would be cut off. At that point, all they needed was explicit directions on how to comply with the abortion lobby directive.

I know that I sound disrespectful of these senators who hold lofty positions in our federal government. But more of us should speak out against foolish behavior when we see it. Otherwise, these elected officials learn that our bark is much worse than our bite. We need to speak out so that voters know who to eliminate in the next election (or who to recall or impeach as soon as possible, if possible under the law). The elected officials only respond to criticism that carries a punch. And right now, the abortion lobby carries that punch because they will withdraw funding from any and all candidates who disagree with them.

I was frustrated with our elected officials on this bill already, but then I watched the video of a debate between Senator John Corwyn and Senator Diane Feinstein, in which the bill was discussed in depth on the floor of the Senate. Senator Feinstein is insincere in every statement she makes in the debate. At one point, Senator Corwyn asks Senator Feinstein if there was a way to pass the bill by modifying the language of the abortion restriction that had been in the bill from the very beginning. To that, Senator Feinstein replied, “why don’t you just take it out”. She had already explained that abortion advocates had suffered defeat after defeat over the past several decades and that they were finally taking a stand on this vote.

Are you kidding me? Enough people voted to elect Senator Feinstein into office and the best she can come up with is, “why don’t you take it out”? This sounds more like a child’s negotiation with a sibling in which both children want the last cupcake.

The provision should not be removed from the bill because until the abortion activists told the lawmakers they couldn’t vote for it, most of the lawmakers were going to vote for it. They were going to vote for it because it would start the process we need, to begin helping over 100,000 current victims of sex slavery in the U.S. Over a dozen known abortion advocates were co-sponsors of the bill and the bill breezed through committee with little more than a rubber stamp because it is clearly a good thing. On top of all that, the “objectionable” language has been federal law for 39 years.

In the video, Senator Feinstein shows her hand and the hand of the abortion industry in saying, “I see it as standing up for a principal.” Keep in mind that Senator Feinstein is aware that there are currently victims out there who are suffering horrible torture. She herself admits that there are young women in the U.S. who are stripped naked and handcuffed during the times when they are not “working”, to make it more difficult for them to escape their captors. I wonder what these victims would say about Senator Feinstien’s principals.

If the current victims could vote on this bill, they would vote for it unanimously, as written, including the restriction on abortion funding. They would also be happy to trade places with Senator Feinstein any day. But Senator Feinstein offers an alternative argument which again hearkens children fighting over a cupcake, “just remove the language so we can pass the bill, then we can see about amending it later”. Fascinating concept Senator… How about passing the bill as-is, then seeing about amending it later. The thing is, the language was in the bill when you signed on. Where is your integrity? That is a redundant question Senator, as we know your integrity is in the hands of Planned Parenthood.

Are the senators who are suddenly holding up this bill, participants in the victimization that could be avoided or stopped by enforcement actions that would take place under the bill? You be the judge. But don’t do it privately. Contact your senator today and urge them to pass the bill immediately.

But we have to also realize that a law is just a start. We also have to address the cravings within our culture. Why is our culture so infatuated with rape, slavery and victimization? Why are traffickers finding such success in the U.S.? No law can impact the root cause of all of this. We need to address this from the core of our own beliefs and desires. Pornography, relativism and a grossly distorted understanding of authentic love is at the root of all of this. Abortion, contraception, sexuality, the liberal media and many other issues all play into this severe problem in our culture.