The President and Mr. Bean 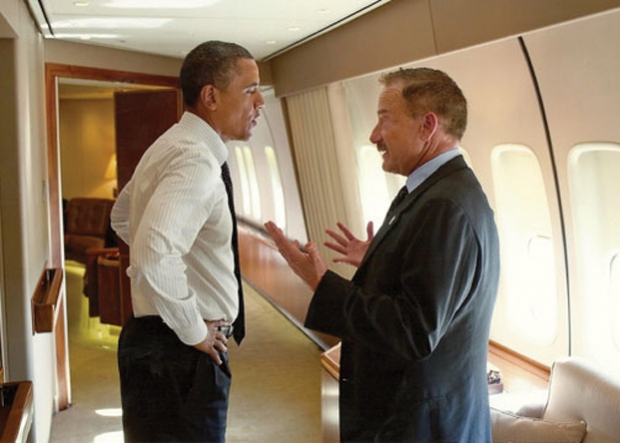 Terry Bean has been a very successful man for most of his adult life. Already from a very prestigious West Coast family, he has risen to great financial heights as the owner of a large investment real estate company in Portland, Oregon. He has thousands of adoring fans, who have showered him with awards, honors and devotion. And as you may imagine, he wields considerable political influence, raising enormous amounts of money and contributing more of his own money to his favorite political candidates and causes. He’s been a guest on Air Force One and has hosted fundraising dinners at his posh Oregon home for the likes of Barack Obama, Bill Clinton and Al Gore. You have probably never heard of Terry Bean, and if the mainstream press, the Democratic National Party, the Human Rights Campaign and the White House, have their way, you will hear very little from this day forward. This is because in addition to all his business and political savvy, the 66 year old Terry Bean may also be a child rapist. Bean and his 25yr old ex-boyfriend were just arrested for a sexual encounter with a 15 year old boy in a Eugene, Oregon, hotel in 2013.

To you and me, any intimate contact with someone who is over 40 years younger than we are would be a freaky thought. But to Bean, it must have been easy to become intimate with a 25yr old, so is it such a stretch to think he may have become intimate with a 15 year old? To the contrary, it seems that it is the logical extension.  What is the big difference between a difference in age if it is 41 years or 51 years?  One is nearly 1/2 of a century and one is a little over 1/2 of a century.

Bean and his “ex-boyfriend”, Kiah Loy Lawson had a falling out at some point before their arrest because Mr. Lawson discovered Bean had been secretly videotaping his sexual encounters with other men. Apparently that didn’t sit well with Mr. Lawson and he ended their relationship and took the story to a local reporter who did a long article on the two men in June. I don’t believe that tawdry affair was picked up by any mainstream media outlets.

The 2nd chapter of the story just unfolded last week. But the skilled “reporters” at CNN and MSNBC seemed to have missed both the June story as well as the current reporting about Bean and Lawson. I searched both names on the two websites and neither turned up one hit. I didn’t bother with CBS, ABC or the other big names in the industry. So for now, you have to get your information by going to the local news and probably some outlets that are not quite as dominant in the news industry.

The article in Willamette Week and the more recent one in the Oregonian do a solid job of laying out the terribly inconvenient facts that have brought Mr. Bean to his current situation. The facts are not inconvenient for Mr. Bean, they are downright tragic, but for Mr. Bean’s friends, they are inconvenient. Especially since he is one in a long line of inconvenient benefactors to the politicians we continue to elect into public office in this country. Is it any wonder we end up with politicians like Barack Obama, Joe Biden, Anthony Weiner and Mark Sanford when we see some of the filth who supports their rise to political success?

I must admit that I am frustrated with the blatant bias that that mainstream media has adopted over the years. There is an evident hierarchy to the importance of human tragedy. At the very pinnacle of the hierarchy are attractive females who harm children. Whether the harm is severe neglect and possible murder to simply a taboo relationship with a minor, these stories gain national attention and survive for months in the early minutes of the nightly news and special editions of popular news programs. The media loved telling us all about Mary Kay Letourneau, Carrie McCandless and Debra Lafave. There are people out there (sometimes the family members of the child, who claim that the teacher/teenager love affairs were victimless crimes). But we also know about Erin McLean who became romantically involved with a student named Sean Powell. Advocates for victimless molestation have a hard time remembering this story because Sean Powell ended up dead in his car outside the McLean residence. Then we also have the Casey Anthony horror show that dominated the media for years. The one thing these stories have in common is an attractive female villain who has shown a nearly insatiable taste for sex or partying. If you watch the news, you will realize that they might report on the portly trucker who molested a child or the homely parent who abused his or her child, but such stories come and go very quickly. They don’t have the viewer appeal of a twenty-something female school teacher who got caught kissing one of her students. You can thank a nation raised on pornography for this trend.

Slightly lower on the hierarchy of newsworthiness are the politicians, religious, sports or entertainment industry stories of taboo behavior. But in this category, the politicians and entertainment industry darlings get a free pass. Thanks again to the pornography industry, Woody Allen and others seem to welcome the attention and the industry executives see such coverage as welcome publicity. But coaches and religious figures are immediately and aggressively condemned before any judge or jury even sees the evidence. You may not recall when Michael Jackson was accused, law enforcement struggled to find any evidence of impropriety behind the walls of his super-exclusive private compound. Mike Tyson was actually convicted and sentenced for rape, and in spite of his absolute lack of social and acting skills, he is cast in Hollywood movies. Brittany Spears, Lady Gaga, David Letterman and others have had no trouble staying on top while the media covers their scandal. Bill Clinton is the darling of the Western world once again, after his oval office escapades with Monica Lewinsky. Thanks to the pornography industry and the hard work of marketing and public relations executives, stunning indiscretion and blatant dishonesty is spun into nothing more than entertainment and easy material for monologues on late-night television.

Clearly, America assumes some people are already morally corrupt. This category includes politicians and entertainers who are easy on the eyes. But scuzzy predators like Jerry Sandusky and any religious figure such as a megachurch pastor or a priest are somehow viewed as something totally different. America cannot tolerate it when an unattractive preacher or coach is accused of harming a child. In these cases, the news stories turn into indictments of entire religions, entire school administrations or entire youth organizations. Parents who didn’t think twice about allowing their child to go to sleep-overs at Michael Jackson’s house (and there were dozens and dozens of such parents), probably would have recoiled with disdain at the thought of leaving their child alone with a Catholic priest for 20 minutes.

So do not expect the media to pay much attention to Terrence Patrick Bean. He is in a class of Americans who can survive and even thrive after the accusations and charges he now faces. He has been a powerful player in an industry known for loose morals (politics, not real estate) and he has enjoyed close contact with powerful players in politics. In addition to that, he has been a highly praised champion of homosexual behavior. He helped start the Human Rights Campaign (HRC), which is currently the most powerful and most financed activist organization in the U.S. with regard to homosexual behavior. The HRC honored Bean with its Legacy Award in 2008, but he will probably step down from the HRC board of directors fairly soon.

I presume that CNN and NBC, as well as the other mainstream media outlets are waiting for more information on Bean’s arrest. Maybe they will send in their camera crews and top “reporters” if charges are dropped, if a grand jury fails to indict or if a jury acquits. 25 year old Mr. Lawson probably won’t have much success in the matter though. He’s already gone on record as an accuser of a powerful man and he doesn’t have the decades of gay-activist credentials behind him. Instead he has a history of petty crimes, drug use and risky behavior.

So why is it important to write about awful stuff like this? Because the journalistic integrity of Walter Cronkite and other pioneers of the news media is long gone and has been replaced by “reporters” who have a better eye for ratings than the truth. Your news is provided to you with an agenda. If you watch t.v., read the major newspapers or listen to your news from the major outlets, you are getting nothing more than the opinions and views of the executives who write the paychecks for the story writers commonly referred to as “reporters”. The conservative outlets suffer from some of the same thing as the progressive ones, but since you are inundated with stories from the progressive media, you have to seek out the conservative perspective. Nonetheless, you should read, watch and listen to all the news with you intellect intact. You need to check the claims, review the information from both sides and then hold that information up to your conscience. Few people do that today.

Most people have their favorite news source and end up hearing one biased story after another. Few take the time to check facts, think about the issue independently and realize that you can rarely believe what you read. In fact, most people only take the time to hear the bare minimum about most things. The bare minimum is the summary or conclusory statement of the biased “reporter”.

This is why I’ve written about Mr. Bean, the “lover” that is 41 years younger than he is and the 15 year old boy who had no business being in a hotel room with these two. You need to know all of this because it has been Mr. Bean, who has shaped much of the public’s perception of homosexuality over the past 40 years. It was Mr. Bean who continually preached that equality is essential and that homosexuals have been ostracized, mistreated and victimized. Well, it appears that Mr. Bean himself is now accused of victimizing a child and unless someone writes and talks about this, the White House, the Democratic Party and key players in local and national politics will still accept his money, take his advice and give his words credence. Oh, they will try to distance themselves for awhile, but politics is an intoxicating drug, and if Mr. Bean retains any shred of his past influence, he will find an audience, especially after winning the praise and adoration of the LGBT community for all these years. His inconvenient foray into hotel rooms with 15 year old boys will be as memorable as the missteps of Bill Clinton, Eliot Spitzer, Mark Sanford, Larry Craig and Anthony Weiner. You probably remember most of Bill Clinton’s escapades, but I bet you had to look up information on the others. That’s what they count on.