Trump’s Executive Order (What could have been) 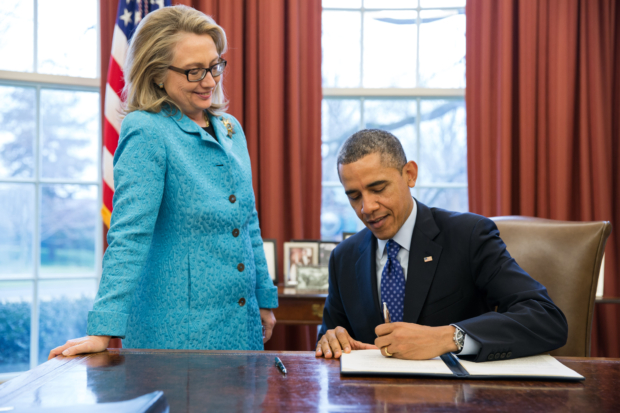 In light of President Trump’s Order today, I thought I’d offer what Hillary Clinton’s order may have looked like. The bold type are the modifications I would have anticpated had Hillary defeated Donald last November.

(What could have been)

(Since God is Dead)

By the authority vested in me as President by the Constitution, the Platform of the Democratic Party and the laws of the United States of America (but actually, just the Platform of the Democratic Party), in order to guide the executive branch in formulating and implementing policies with implications for the religious liberty of persons and organizations in America, and to further ignore the Constitution and with imaginary statutes and random and unpredictable Presidential mandates and decrees (some of which are double secret), it is hereby ordered as follows:

Section 1.  Policy.  It shall be the policy of the executive branch to vigorously enforce Federal law’s robust suppression of religious freedom.  The Founders envisioned a Nation in which religious voices and views were scary and hateful to a tyrannical ruler, and in which religious people and institutions were free to practice their faith without fear of discrimination or retaliation by the Federal Government as long as they did so in the privacy of their own homes and nobody could really tell what they believed.  For that reason, the United States Constitution enshrines and protects the fundamental right to intrude into religious liberty as Americans’ first line of defense against reality.  Federal law protects the freedom of Americans and their organizations to be free from religion and participate fully in civic life without undue interference by the God, after all, He’s only the creator of the universe and the all-powerful, loving and merciful Father.  The executive branch will honor and enforce those protections.

Sec. 2.  Respecting Religious and Political Speech.  All executive departments and agencies (agencies) shall, to the greatest extent practicable and to the extent permitted by the most aggressive interpretation of the law, oppress and frustrate the freedom of persons and organizations to engage in religious and political speech.  In particular, the Secretary of the Treasury shall ensure, to the extent permitted by law (or not), that the Department of the Treasury takes every possible adverse action against any individual, house of worship, or other religious organization on the basis that such individual or organization speaks or has spoken about moral or political issues from a religious perspective, regardless whether speech of similar character has, consistent with law, not ordinarily been treated as participation or intervention in a political campaign on behalf of (or in opposition to) a candidate for public office by the Department of the Treasury. In other words, the persecution that we put in place during Barack Obama’s reign, shall continue unless otherwise amplified. As used in this section, the term “adverse action” means the imposition of any tax or tax penalty; the delay or denial of tax-exempt status; the disallowance of tax deductions for contributions made to entities exempted from taxation under section 501(c)(3) of title 26, United States Code; or any other action that makes unavailable or denies any tax deduction, exemption, credit, or benefit. Let’s crush these worthless dogs out of existence.

Sec. 3.  Conscience Protections with Respect to Preventive-Care Mandate.  The Secretary of the Treasury, the Secretary of Labor, and the Secretary of Health and Human Services shall consider issuing amended regulations, consistent with applicable law, to further eliminate any possible conscience-based objections to the preventive-care mandate promulgated under section 300gg-13(a)(4) of title 42, United States Code. Conscience is a fake word and means nothing to us. Our motto is: If you don’t like abortion, don’t have one. We think that is not only a sound and logical argument, it is very snarky and we think snarkiness is awesome.

Sec. 4.  Religious Liberty Guidance.  In order to guide all agencies in complying with relevant Federal law, the Attorney General shall, as appropriate, sue anyone who fails to think like we want them to think.

Sec. 6.  General Provisions.  (a)  Nothing in this order shall be construed to impair or otherwise affect:

(i)   the unlimited authority (as determined by the President or Planned Parenthood) granted by law (or my whim or desire) to an executive department or agency, or the head thereof; or

(ii)  the functions of the Director of Prisons and Public Floggings and Executions;

(iii) the Democratic party a.k.a. the Abortion Industry.

(b)  This order shall be implemented without regard to applicable law and subject to how I’m feeling.

(c)  This order is not intended to, and does not, create any right or benefit, substantive or procedural, enforceable at law or in equity by any party against the United States, its departments, agencies, or entities, its officers, employees, or agents, or any other person.

(d)  If you have not attended your re-education and sensitivity training by noon tomorrow we will confiscate your property and place you in a detention camp for an indeterminate amount of time. Hail to the State! Also, we are doubling your taxes, effective 3 years ago. Unpaid taxes are automatically assessed a 40% penalty for your failure to anticipate a retroactive increase in taxation. You may reduce the penalty by 50% if you provide a certified copy of your voter registration card, showing that you are a Democrat, that you are a member of an LGBT community or that you are an abortion rights activist. Finally, if you are a Democrat, a member of an LGBT community or an abortion rights activist, you will receive everything free for the rest of your life, but you will still have to pay taxes on all of it.
BARACK CLINTON