A Society in Decline 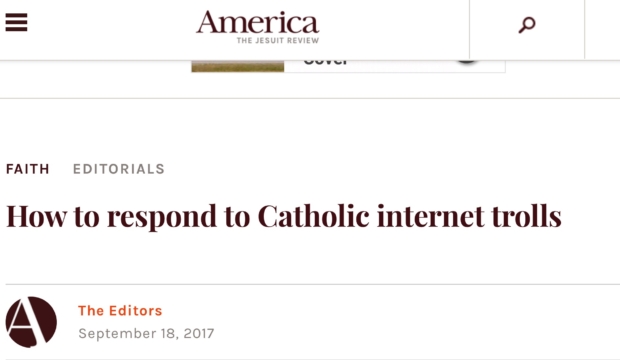 The Jesuits have inflicted many wounds on Catholic education and thought since the mid 1960’s. One would have hoped that the wacky ones had all aged into retirement but it looks like a few of their pupils have retained the misinformation delved out by the graduates of the Jesuit seminaries of the 1960’s through the 1980’s. Thankfully not all Jesuits are misinformed. Fr. Mitch Pacwa is an example of a Jesuit who has not abandoned the teachings of the Church. I just wish there were a lot more like Fr. Pacwa and a lot less like Fr. James Martin.

The “Editors” of America Magazine, the flagship publication of the Jesuit order in the United States, published a short article titled, How To Respond To Catholic Internet Trolls. I don’t know if there is any information on who these editors are but the Editor in Chief is Father Matt Malone, S.J. and Fr. James Martin, S.J. is an “editor at large”. Any Jesuit worth his weight in salt would be ashamed of the labeling and name-calling in the article as well as the self-righteous tone used by the authors. It is evidence that the once-noble Jesuit order is in serious decline. The article sounds like it came from a group of college sophomores, not the editors of the flagship magazine of the American Jesuit order.

I’ve quoted the entire article below (indented each time), with my comments as necessary:

“The recent uproar over Theological College’s decision to disinvite our colleague, Father James Martin, in response to organized pressure via social media offers several important lessons. The pattern of bullies and trolls being incited to strong-arm an organization or institution into cancelling a speaker whom they find objectionable is an increasingly common tactic among an array of ideological factions, as President John Garvey of the Catholic University of America has observed. Leaders in the church should think carefully about how to respond.”

Basically, people recognized Fr. Martin’s false teachings on sexuality and decided it was not wise to give him a platform to say whatever he darn well pleases. Now the Jesuits are stomping mad because they thrive on saying whatever they darn well please, which has left several generations of very confused Catholics in their wake. Many an article or comment which is critical of the Catholic Church begins with these words: “I am a product of Jesuit education”. That is code for, “I have no idea what the Church teaches but I’m about to tell you what I wished the Church taught”. You frequently discover that the person who boasts about their “Jesuit education” is no longer (or never was) a faithful Catholic.

A Jesuit education is not something to gloat about when discussing faith.

Let’s learn what the Jesuits recommend with regard to Catholics who disagree with Fr. Martin:

“First, it is neither possible nor prudent to expect to be able to surrender to the internet troll and get to the other side of the bridge unscathed, with controversy avoided and no one the wiser. Recognizing this requires only attention to the current media environment, not theological analysis: Either the threatened disruptions or the cancellation of the speech will become the story, but once the trolls have a target in their sights, the story will not pass without notice.”

In doing this, Fr. Martin proposes one of two things: Members of the LGBT community will never be told they must repent or that we mislead them at first, then once they feel like they are part of the Catholic Church, we start talking about their need to repent.

In the first case, we basically pat them on the back and lie to them until they die in which case we may be helping them spend eternity in Hell. In the second case, we end up with a lot of converts who end up feeling tricked and betrayed. How do you think that is going to work out?

I suggest we should be honest with people right from the start. Do we accept members of the LGBT community? Absolutely. We’re all sinners, so we better not turn sinners away at the door of the Church, or we ourselves cannot enter. But can we accept behaviors and the advocacy for the behaviors? No we can’t. Truth is truth and the Church must always echo Christ’s call for repentance. Without repentance, there can be no forgiveness of sin, therefore, a repentance-free faith is in vain.

As for the remainder of the above quoted paragraph, I’m not bright enough to understand what they mean or maybe they need to edit it a bit. Suffice it to say, they are mad and they are labeling those who disagree with them in order to demonize them and to ostracize them. That is not a Christian way to handle this.

“Second, since the bullies and trolls are preying on weakness as much as or more than hunting for supposed transgressions against orthodoxy, succumbing to such pressure only invites more of it in the future, from the same sources and others who conclude that heckling and harassment get results.” To question their conclusion means something is wrong with me.

This is simply a diversion. It is not worthy of the once-great Jesuit tradition of intellectual debate. Name calling, logical fallacy and warning against a vague slipper slope (an appeal to fear) would not make St. Ignatius proud. But St. Ignatius has not been proud of the Jesuits for a long time.

“Third, and most important, these attacks do violence to the truth. They are almost always rooted in prejudice and characterized by uncharity and personal insults.”

Some are quick to pull out the Judgment prohibition.

Ah, more demonizing. First they say the disagreement is an attack. Then they explain that the disagreement is due to prejudice against the LGBT community or lifestyle. Finally they claim that the critic uses uncharity and personal insults. I suppose it is a lot like calling people trolls and bullies. I wonder if their article is going to stay up and remain published after they see the hypocrisy in their writing?

“They almost never bother with a careful reading of the material they summarily dismiss and denigrate. Even if they do, in their carelessness, touch on important doctrinal questions, the attractiveness, coherence and clarity of Catholic truth suffer from the suggestion that it needs or encourages such vitriolic “defense.” Put more simply: The truth that the Gospel is a message of salvation and freedom is undermined when those who claim to be serving it act without love.”

“The work of evangelization seeks not the defeat of those in error but their conversion, and it ends not in victory but in communion.”

Hmmm… Is it possible the editors of America Magazine are in this to win, i.e, to defeat those who disagree? If the Jesuits behind the magazine really wanted communion, they wouldn’t label us so harshly. They would invite the discussion and reach out to the most eloquent voices who disagree, voices like Dan Mattson, Patrick Coffin, Cardinal Sarah, Joseph Sciambra and Robert George.

Basically, the wording and tone of the article is not what one should expect from highly educated and faithful Catholics who are open to discussion. Unfortunately, this is the language and the tone we often hear from people affiliated with progressive groups who are trying to destroy the Church in the United States and Europe. Such people are rarely capable of an honest discussion.

“It is likewise a mistake to ignore or dismiss those whose so-called evangelization takes the form of online attacks, and whose goal seems to be a purge of Catholic voices who do not meet their standards of purity.”

I’ve been following Fr. Martin’s social media, especially his Twitter account. Many of those who disagree are asking Fr. Martin extremely simple questions that are far from attacks. Many are simply quoting Scripture to him and asking him to repent. Some are pointing him to valuable resources so he can research and learn where he is wrong on this issue. Very few remarks are disrespectful, aggressive or a personal attack on him. So if you consider the criticism of Fr. Martin, the overwhelming majority is a charitable or at least a courteous effort toward fraternal correction.

“Those who lead such efforts are claiming a kind of parallel magisterium, substituting their own outrage for the judgement of those who occupy the church’s legitimate teaching office.”

This sentence is actually quite humorous. Those who are criticizing Fr. Martin are the ones pointing to Scripture, the Catechism and the writings and documents of popes, councils and saints. It is Fr. Martin who is ignoring the magisterium (the Church’s teaching authority) in his new approach to an old problem. Others are asking too.

So here, it is Fr. Martin and his supporters who say we are the ones with the parallel magisterium. What is their proof? They say so. Brilliant. Not actually. It is childish and nothing more than a ploy adopted by the infantile minds Marxists and their spawn, the Antifas.

“They must be confronted, and church leaders—especially those whose viewpoints may differ from those of the persons under attack—should speak up strongly and clearly against these attacks and attempts at intimidation. The communion of the church needs to be defended—not from the peril of theological discussion but rather from that of being monitored and policed by the loudest and least loving voices among us.” Maybe this is considered trolling?

So here is the Jesuit call to action. Cardinals, bishops and theologians are now supposed to rush to the support of Fr. Martin and join the editors of America Magazine in labeling everyone who disagrees. After all, they are speaking out against the “least-loving”, right? That is another veiled way to label us as haters.

Fr. Martin refuses to enter into a theological discussion. As proof of this, you can look at his Twitter feed and see that under most LGBT related posts of his over the past week (which are the majority of his Tweets by the way) some of us have posed a variation of one question: Is homosexual sex a sin? Please realize that the average child could easily answer that question and do so correctly. Fr. Martin however cannot answer it. He has written on homosexuality extensively. He has spoken at conferences and other gatherings, attended interviews with the media, promoted his recent book far and wide, written articles, delivered homilies and engaged in a multitude of conversations both personally and through social media. Yet he can’t answer this one very simple question (which is not covered in his book by the way).

The Jesuits were once the intellectual elite in the Catholic Church. They were the most intellectually gifted and most educated order in the Church and therefore they came to fill the role of the teachers and administrators in the Catholic universities, colleges and prep schools. They not only encouraged the pursuit of truth through open dialogue, they engaged in it. That has changed, and I think you can see why. They have abandoned the truth, and now all they can do is avoid the dialogue.